Many people feel that public speaking requires a formal, boring, technical jargon. However, in order to master public speaking certain attic it must be followed. This etiquette should come in the form of speaking to your audience as though what they are mental, and educational equals to two you and your topic. Understanding your audience is a crucial part of giving a public speech.

Use notes not script

By using notes rather than using a script you are able to open the floor to questions a lot easier. You can also speak in a friendlier tone rather than in a formal tone. The best way to keep your audience at full attention is to speak to them as though you are speaking to a friend. Use topics that your audience is familiar with and approach the stand as a motivational speaker.

By using a script, you will be tempted to use a more formal tone which will result in a more academic sounding speech. This is something you will want to avoid if you plan to hold your audience at attention through the duration of your presentation.

Approaching your audience as equals

Many public speakers make the mistake of talking down to their audience. This results in the audience feeling as though the speaker is an arrogant and places themselves on a pedestal that is above reproach. This mistake will lose your audience faster than any other mistake you could make in public speaking. 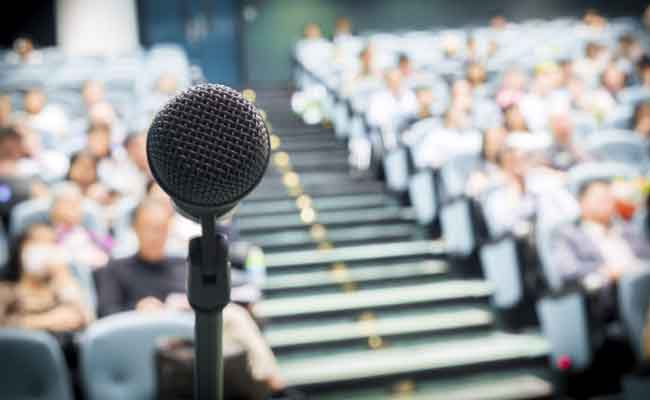 Another serious mistake is failure to wait your turn during a presentation. When you are introduced by someone, the proper etiquette is to wait until the speaker stakes their seat the four you stand up and approached the podium. Very often the soon to be speaker stands up before the person is introducing them takes their seats. This result in and very awkward situation. Take for example the following scenario:

Not only is this awkward and distracting for Sally, it is very distracting to the audience as well as there is still movement on the stage and most of the guests are paying more attention to Sally than they are to Jim.

How this situation should have been handled

After being introduced by another person, show that courtesy that the person deserves and wait until they are seated before you begin speaking. It may seem like a long time to wait, but this is only because of nervousness. In reality, the stage is set up in a way that allows only a few seconds to make it from the podium to any seat.

While you wait, smile at your guests and take a deep breath. Allow yourself to adjust to being the center of attention. This will allow you to up to appear calm and in control in front of your audience. It will also allow you to make a great first impression, and your audience will not be distracted by the movement of the second person who is taking a seat.

In professional courtesy, in form the person who is introducing you to the audience beforehand that you will not begin your state until they have taken their seat.